The Art and Beauty of Cast Iron Cookware

THE ORIGINS OF CAST IRON COOKWARE 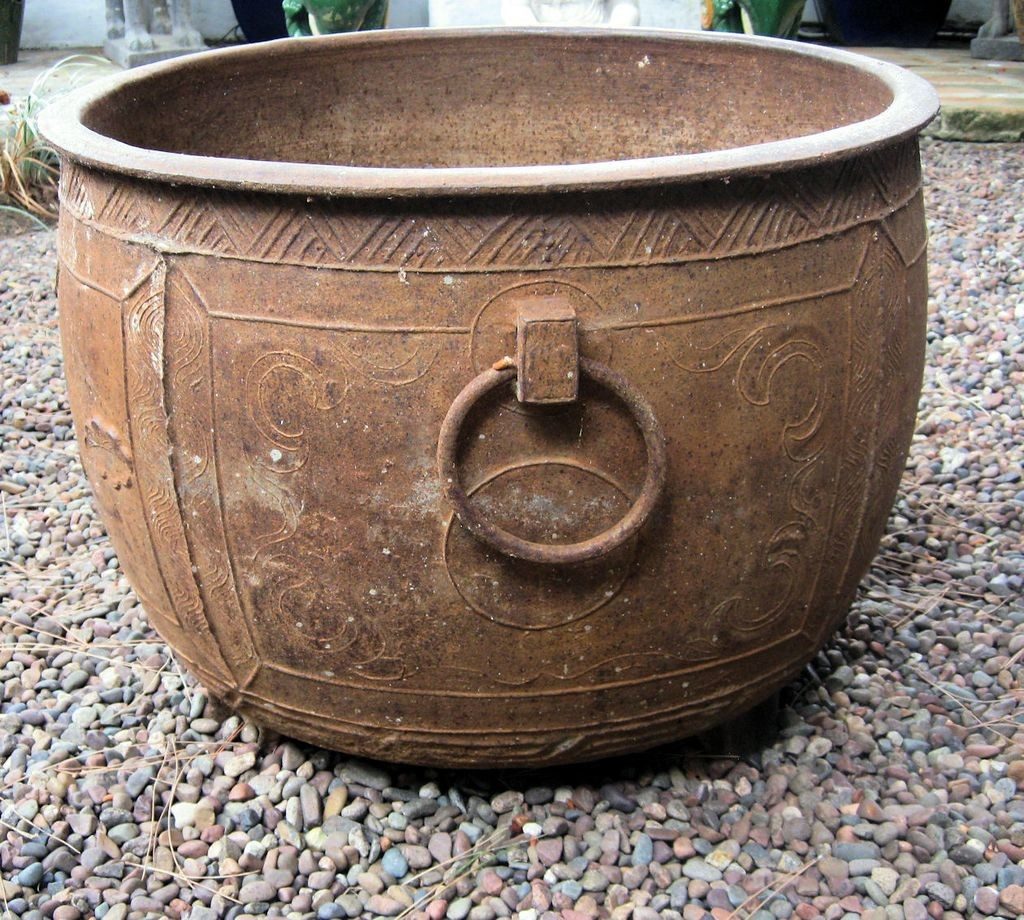 The earliest specimens of cast iron cookware are found in China and date to the 5th century BC during the late Spring and Autumn period. By the Han dynasty, 200 years later, common items found in Chinese homes included cast iron stoves, cooking pots and kitchen knives. [1]  By the time the Ming dynasty rolled around, (see example on the right) cast iron cookware was also an art form. In metallurgy, the Chinese were more than a thousand years ahead of the western world. The first iron foundry in England, for example, dates only from AD 1161. [2] 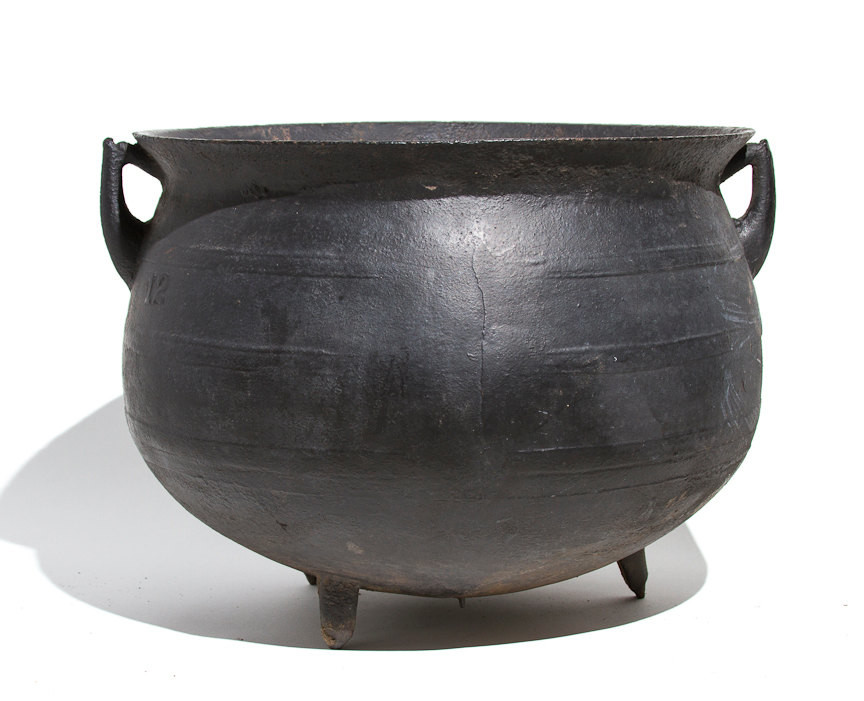 For thousands of years, cast iron cookware has been valued for its durability and heat retention properties, which vastly improved the quality of cooking meals. “In Europe, before the introduction of the kitchen stove in the middle of the 19th century, meals were cooked in the hearth or fireplace, and cooking pots and pans were designed for use in the hearth. This meant that all cooking vessels had to be designed to be suspended on, or in, a fireplace. Cast iron pots were made with handles to allow them to be hung over a fire, or with legs so that they could stand up in the fireplace.” [3] 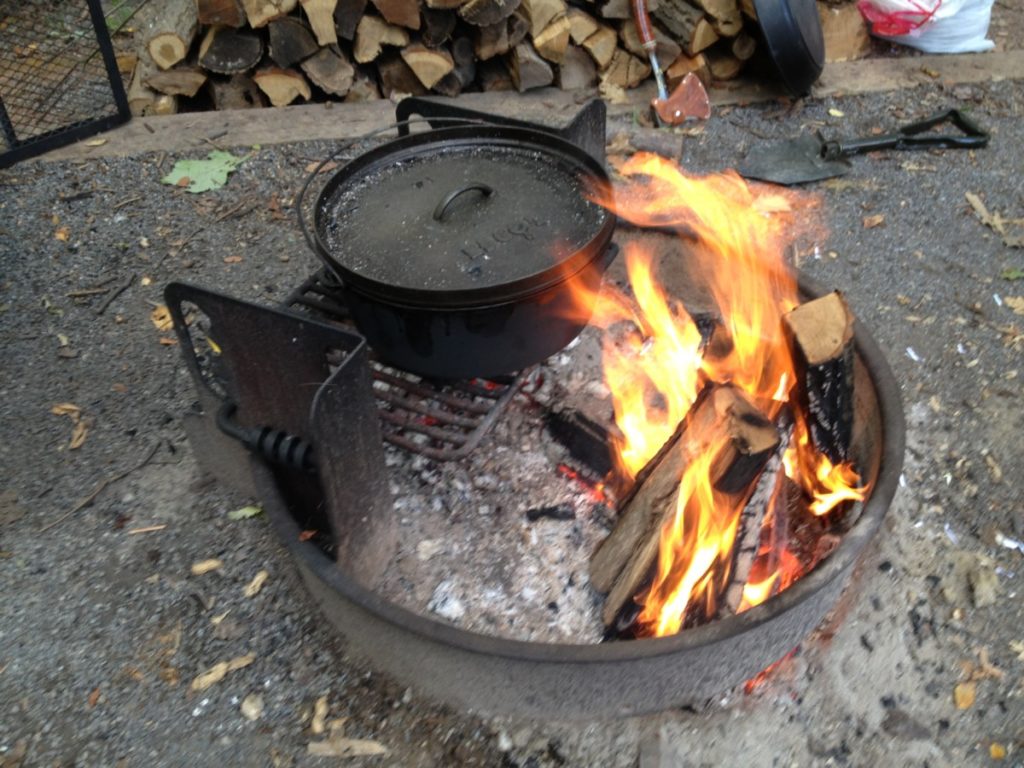 During the late 17th century, the Dutch perfected a way of  producing cast iron cookware that was more advanced than the English system. “The Dutch used dry sand to make their molds, giving their pots a smoother surface. Consequently, cast iron cookware produced in the Netherlands was imported into Britain. In 1704, an Englishman named Abraham Darby decided to go to the Netherlands to observe the Dutch system. Four years later, back in England, Darby patented a casting procedure similar to the Dutch process and began to produce cast iron cookware for Britain and her new American colonies. Thus the term “Dutch oven” has endured for over 300 years, since at least 1710. Colonists and settlers valued cast-iron 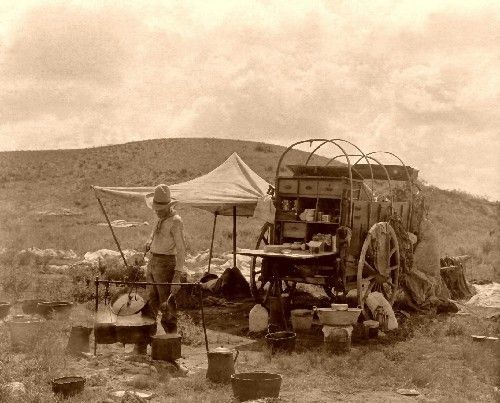 cookware because of its versatility and durability. Cooks used them to boil, bake, stew, fry, and roast. The ovens were so valuable that wills in the 18th and 19th centuries frequently spelled out the desired inheritor. Mountain men exploring the great American frontier used Dutch ovens into the late 19th century. Chuck wagons accompanying western cattle drives also carried Dutch ovens from the mid-19th century into the early 20th century. By the way, the Dutch oven is the official state cooking pot of Texas, Utah and Arkansas.” [4]

THE MODERN ERA OF THE CAST IRON SKILLET

With the onset of the Industrial Revolution in the late 19th century, cooking stoves became popular and cast iron cookware with legless, flat bottoms was designed and this period saw the introduction of the flat cast iron skillet. “Cast iron cookware was especially popular among homemakers and housekeepers during the first half of the 20th century.  Most American households had at least one cast iron stove and cooking pan and such brands as

Griswold and Wagner Ware were especially popular. The Griswold company became known as the premier manufacturer of high-quality cast iron kitchen items in the United States. The Griswold cast iron foundry was based in Erie, Pennsylvania; and until the early 1900s cast iron items from this company were marked with an “ERIE” logo. In the early 1900s this was changed to a “GRISWOLD” logo, and it is this logo that is most commonly associated with Griswold cast iron cookware.” As the original Griswold skillets became harder to find, they became more valued by collectors and by the late 50’s and mid 60’s the prices were starting to go up. [5] 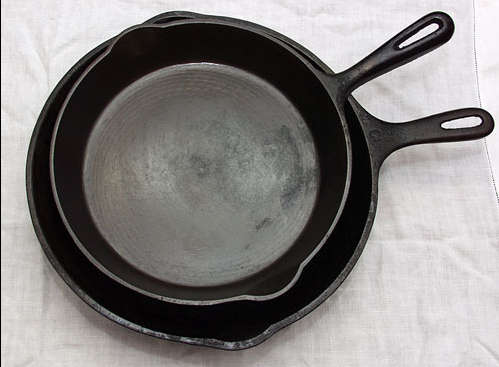 “Cast iron fell out of favor in the 1960s and 1970s, as teflon-coated aluminum non-stick cookware was introduced and quickly became the item of choice in many kitchens. Today, a large selection of cookware can be purchased from kitchen suppliers, of which cast iron comprises only a small fraction.” [6] However, cast iron cookware is making a comeback. The durability, reliability, safety and performance of cast iron as a cooking tool has ensured its survival. Cast iron cookware is still recommended by most cooks and chefs as an essential part of any kitchen. “According to the Cookware Manufacturers Association, shipments of cast iron and similar enameled products in the U.S. have increased more than 225 percent since 2003—rising from $35 million to more than $114 million—while shipments of cookware in general increased by just a third.” [7] 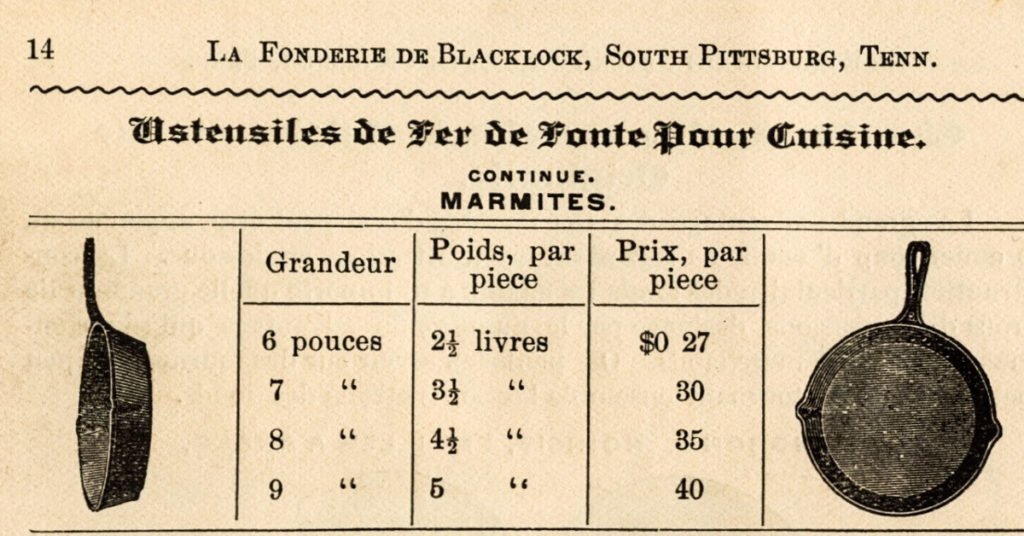 Most American manufacturers of cast iron from the early era such as Griswold, Victor and Atlanta Stove Works have either been acquired by other corporations and no longer produce cast iron cookware in the United States or have gone out of business with the exception of Lodge. Lodge is the only major domestic manufacturer of cast iron cookware today. “Founded in 1896 by Joseph Lodge, Lodge Manufacturing is one of America’s oldest cookware companies in continuous operation. Originally called the Blacklock Foundry, it is still owned and managed by the descendants of the Lodge family. Most cast iron sold by Lodge is produced in its foundry in South Pittsburg, Tennessee, which has been in operation since the company was founded.” [8] “South Pittsburg was settled shortly after the Civil War, and ironworker 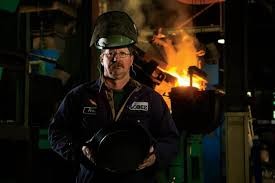 Joseph Lodge started his foundry here in 1896. For most of its history, the company puttered along, ebbing and flowing but never really taking off. It survived the Great Depression by catering to the rich, creating cast iron lawn gnomes and painted doorstops in the shape of dogs. In the decades after World War II, South Pittsburg’s population swelled and shrank as industry came and went. Two neighboring foundries in town shuttered, leaving just Lodge, and the town’s population dwindled by a quarter. The old company gradually modernized, turning from hand molding and pouring to mechanical processes and electrical melters. It laid off workers as it grew more efficient, but sales remained flat. 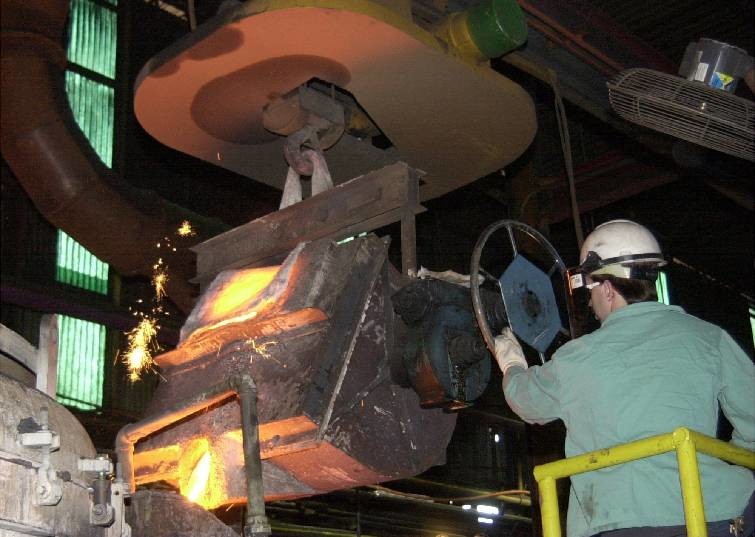 Until 2002, the company struggled to break even.” [9]  In 2002, Lodge won a Good Housekeeping “Good Buy” award for its pre-seasoned skillet, and it appeared on Food Network in a segment on how to properly pan-fry chicken. Since then, company spokesman, Bob Kellermann says, “every year has been better than the last. People like that cast iron is durable and chemical free, he says, and the price is also a selling point—most Lodge products are inexpensive in comparison with stainless steel, copper, and nonstick aluminum pans, and even cast iron from its Chinese competitors. Because most of the raw materials are recycled, the pans are also sustainable.” [10] 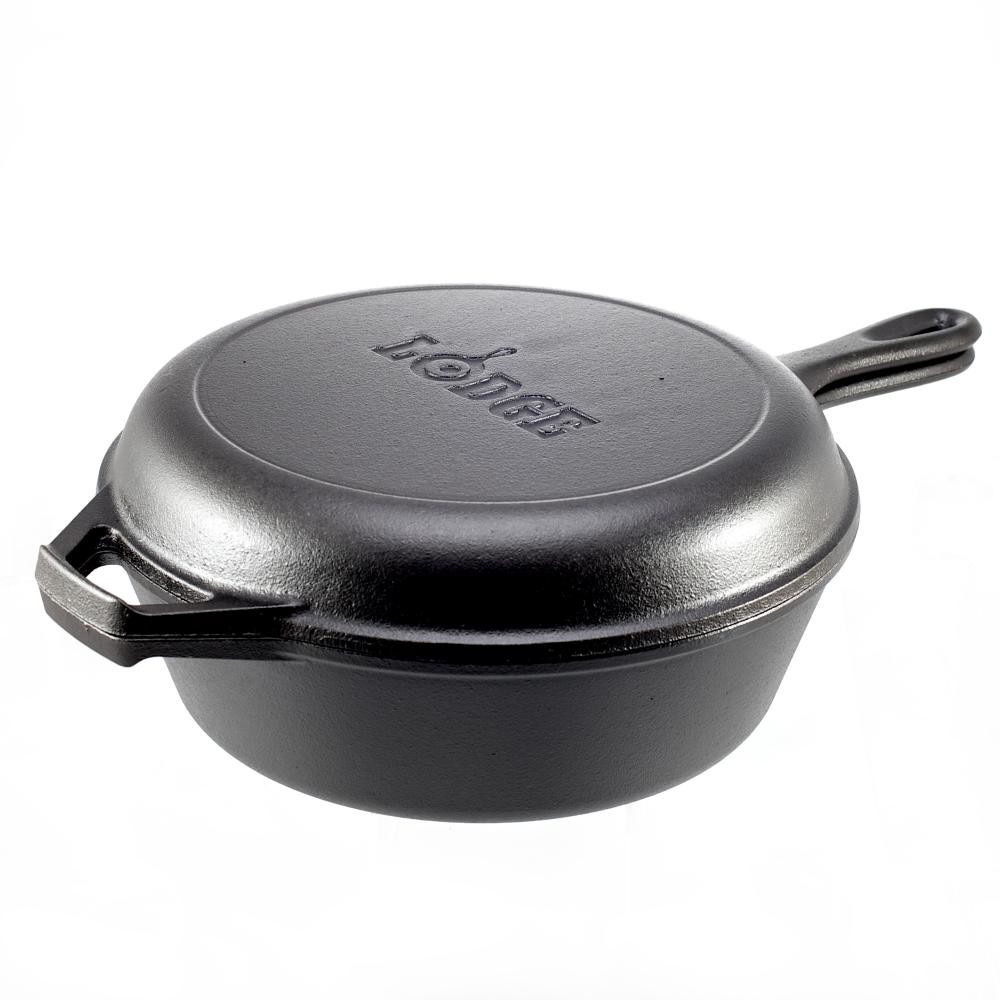 One of the major drawbacks of buying new cast iron cookware was seasoning. Once properly seasoned, cast iron is every bit as good if not better than chemically coated cookware. It is the original non-stick cookware. “Until recently, Lodge sold its products in an unseasoned, silver state, leaving it for customers to cook on the grease that made the cookware nonstick. That was intimidating to “young homemakers,” Kellermann says. They didn’t know what kind of oil to use, how hot to bake it on, how long.” Now that Lodge preseasons its cookware, it is like “instant gratification for the consumer.” All the guess work is gone and you can get right to using your new cast iron cookware right out of the box. This is one of the reasons for its rise in popularity. “Cast iron now makes up about 10 percent of the cookware market, up from just 2 percent or 3 percent a decade ago.”[11]  Combined with with affordability, longevity and superior cooking features, its no wonder that cast iron cookware is making a 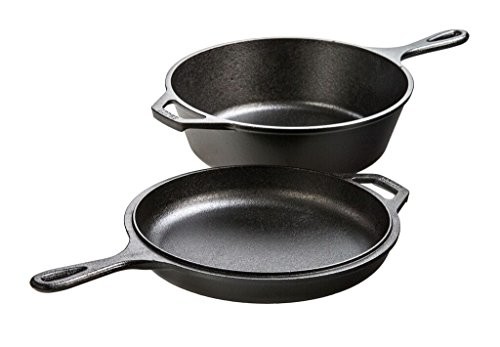 comeback. Lumpy Hummus is excited to feature some of Lodge’s latest products. One of the best values is the Lodge LCC3 Pre-Seasoned Cast-Iron Combo Cooker, 3.2-Quart. (click on the link for a better description) With the Lodge combo cook set you get a skillet and a Dutch oven for one great price ($35.25). Fry up some chicken in the skillet and make chili in the 3.2 quart Dutch oven or make organic vegetable stock and saute tempeh, either way you’re going to find your Lodge cast iron cookware invaluable in the kitchen.

This entry was posted in Uncategorized. Bookmark the permalink.