While answering an ad for some uahiapele kalo (see Kapuna Kalo for more information), we happened upon one of the most beautiful and painstakingly restored heiau on Oahu. Situated on private land in the Makaha valley, we were given permission to enter from the kapuna at 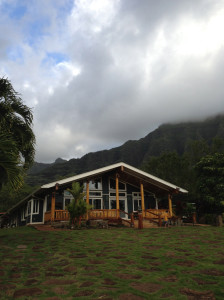 the Makaha Valley Riding Stables and farm (a really cool place to visit as well). On entering the heiau you immediately get a sense of peace and spiritual connection. You can hear the rushing waters of the Makaha stream as it heads to the ocean, the solitude of the tree lined canyon comes alive with the sounds of song birds. After seeing the lush gardens at the Makaha Stables, filled with kalo, papaya, avocado, hydroponic greens, guava and a fish farm, you get a sense of how Kaneaki was once connected to the agricultural community. Excavations at Kaneaki have provided an accurate history of the heiau. The earliest

evidence of this being a place of worship was the platform temple and viewing terrace built in 1545 A.D. Kane’aki Heiau was in major operation for nearly 274 years and went through 6 alterations. During this time it was a place of worship

to Lono the God of peace, music, agriculture and fertility. Legend has it that Lono descended to earth on a rainbow to marry Laka, one of Pele’s sisters. Laka is the Goddess of fertility and hula and is identified with  the red lehua blossom. The annual festival of Makahiki was held in Lono’s honor.  When Kamehameha I took over Oahu in 1795, he initiated the last phase of construction (1795-1812) and ordered that Kane’aki be transformed into a war heiau to

insure his final conquest of Kaua’i. He changed Kane’aki to be a place of worship for Ku, the “Seizer of Land” and God of war. As a war temple, it is said that Kane’aki was where the first prisoners of war were sacrificed. Human sacrifice was Ku’s domain and not part of the worship of the other gods. When the kapu system was overthrown, Kane’aki, was left intact while many other ancient religious sites were destroyed. For this reason it is in a better state of preservation than many other heiau. In order to retain the physical, spiritual and 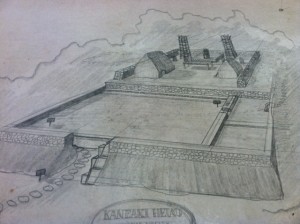 historical aspects of Kane’aki heiau, there have been several restoration projects. In the 1940s the Bishop Museum staff supervised a restoration that used Pu’ukohola, a heiau on the Big Island, as a model for the placement of the houses and tiki diety. In 1969-70 another restoration was conducted by the Bishop Museum in which they reconstructed the “hale mana” (house of power used by the kapuna and kapu for all others) and the “hale pahu” (house of the drum) with an altar pole between them. They erected two 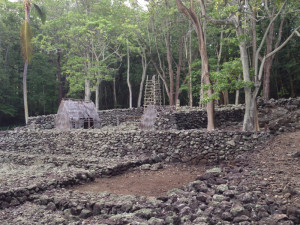 prayer towers that flanked the image of the presiding deity. The placement and dimension of these structures were based on the original post holes found in the stone platform.  Pili grass from the big island and ohia logs were used for authenticity. In 1996-’97 the UH Hawaiian Studies Center also conducted a restoration. Currently the Kane’aki heiau embodies the spirit of Kane the Hawaiian God of creation and light.

According to Hawaiian beliefs, “Kane filled earth with all forms of marine, animal and plant life, and shaped man and woman to live in it. All aspects of life are sacred to Kane. He is said to have shaped man from red earth, white clay and his saliva and the woman purportedly came from his shadow. Worship was simple, without human sacrifice or ritual as all life is sacred to Kane. Kane worshipers were known as he papa la‘a or a powerful holy class to differentiate them from image worshipers. The word Kane also means “man”. As a creative force, Kane was the heavenly father of all men. He was God to all living creatures, the God of sunlight and lorded over the forests and the creatures within and his spirit was found in living water.” There is a large stone that overlooks Kane’aki called “Pohaku O Kane”(the Stone of Kane) from which the heiau derives its 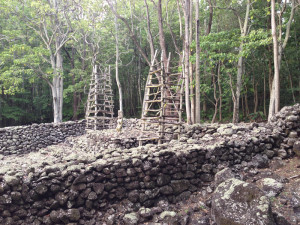 name. It is the guardian of the temple and is still venerated by some people. Kane’aki Heiau remains a significant place of culture to this very day so one should be respectful when visiting. Avoid loud talking or playing music. Do not enter the main platforms or climb on the walls. Remain on the trails. Ho’okupu (which is translated as something that causes growth) is a gift left at a shrine and acceptable offerings are Mai’a (Hawaiian banana), Awa, Niu, Kumu, Wauke, ‘Ohe, Kalo, Ipu or Lua Ki. These offerings should be made in their natural state and not “prepared”. There is no better ho’okupu, than the personal mana you share with us today.” 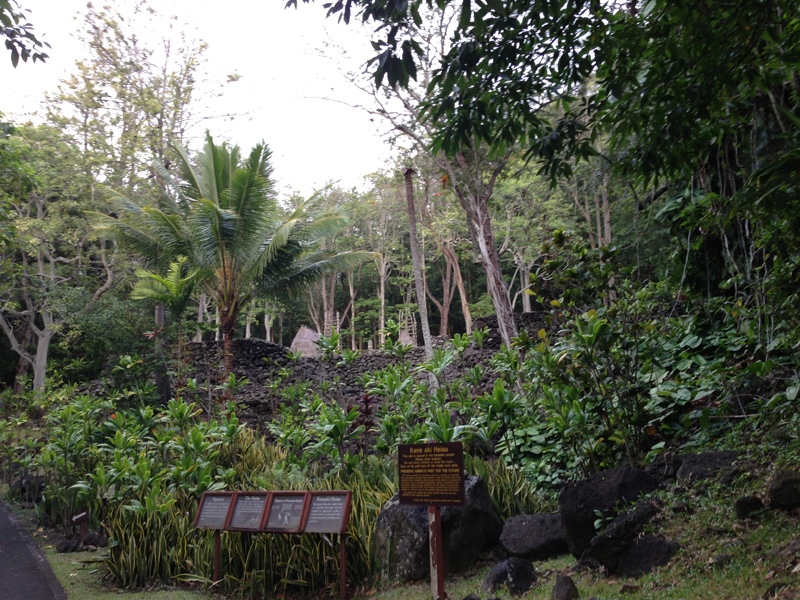 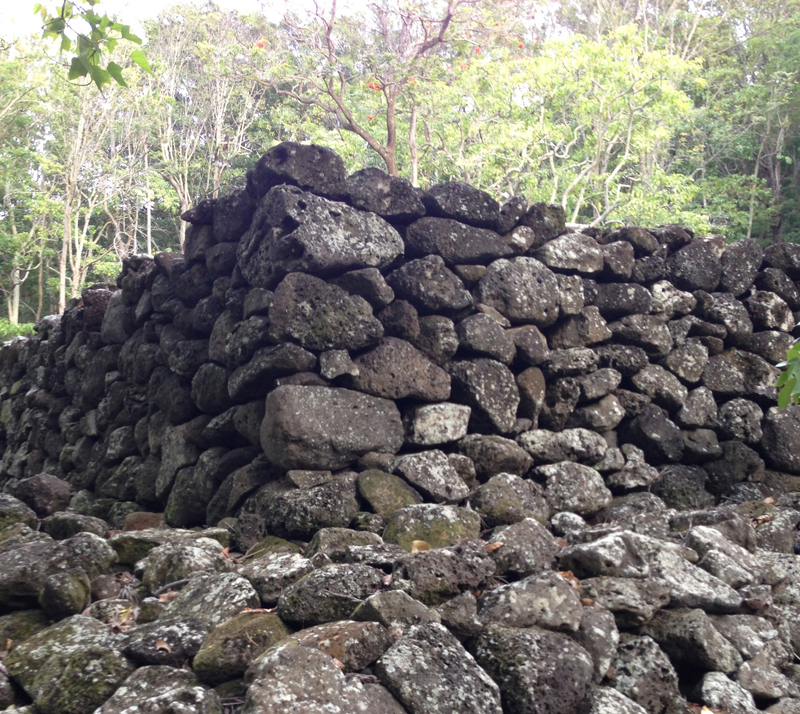 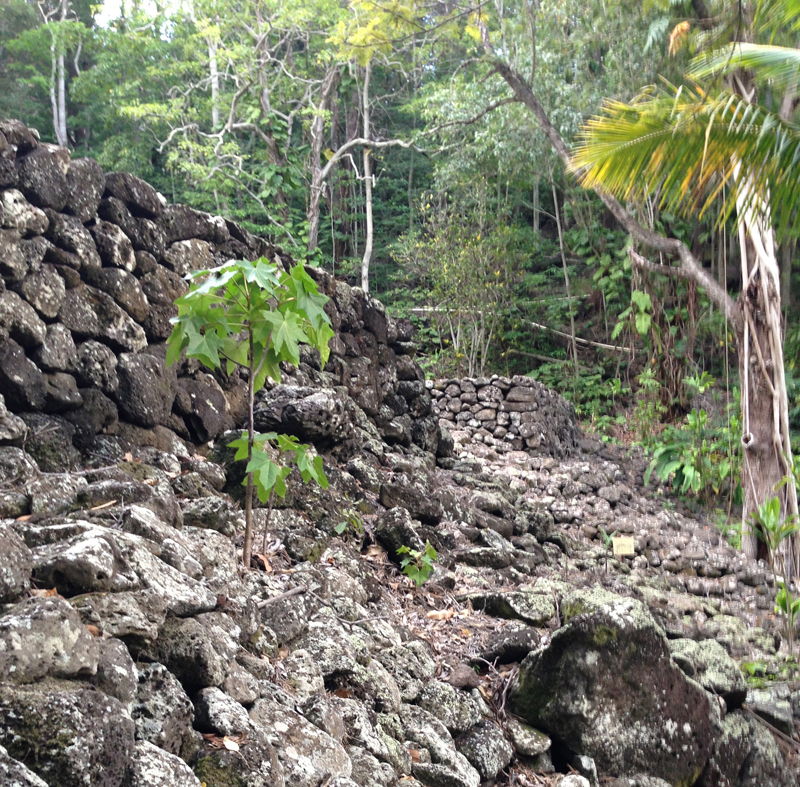 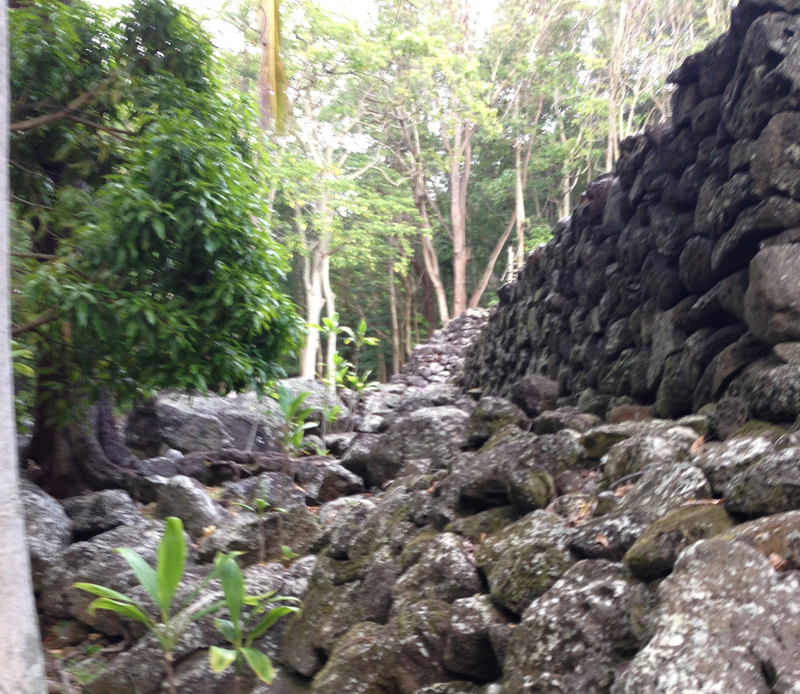 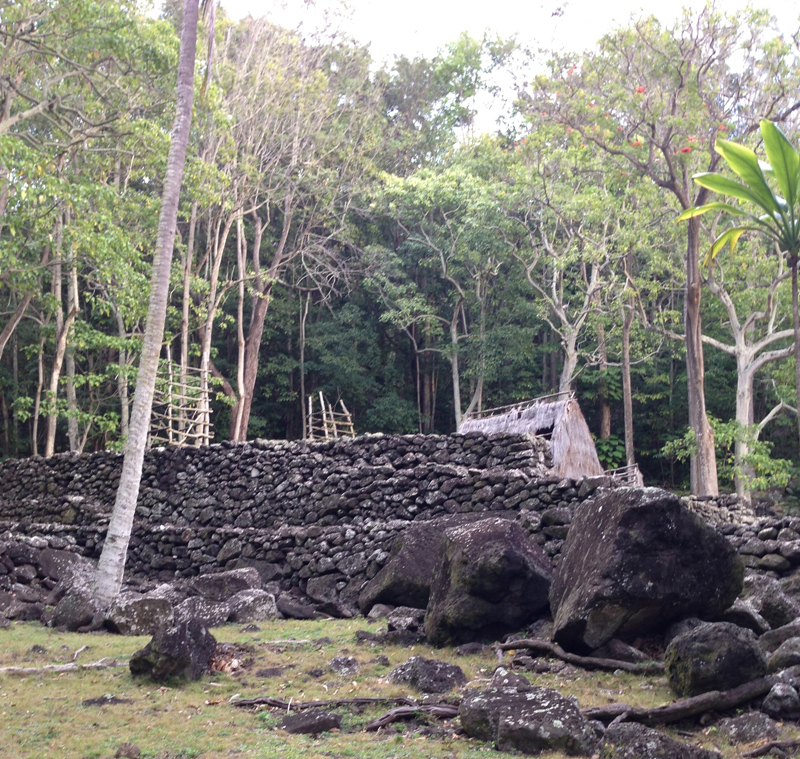 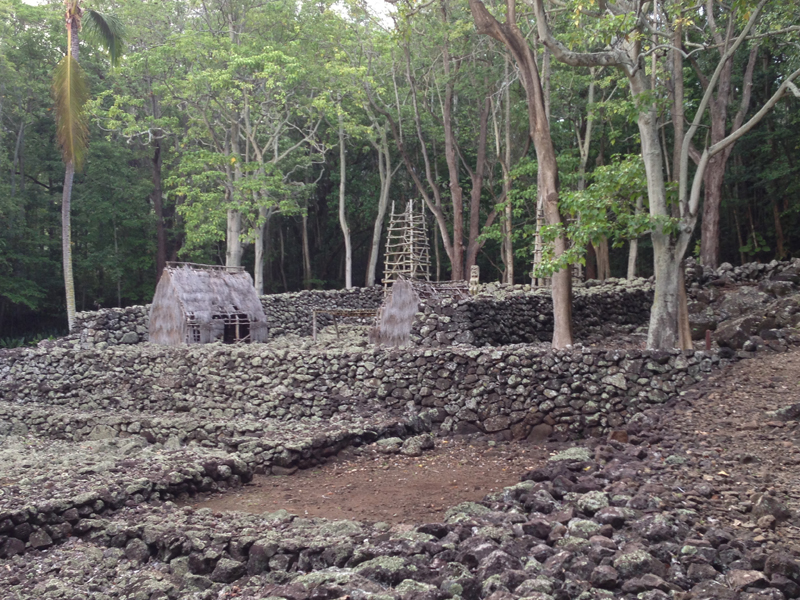 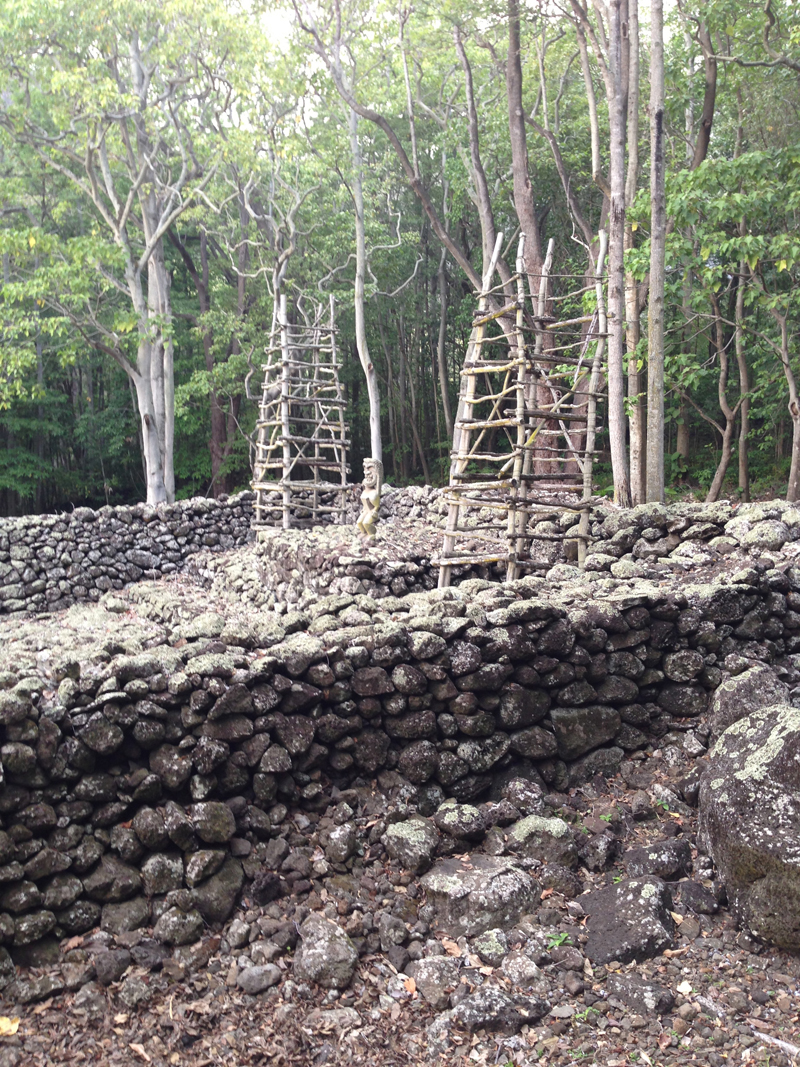 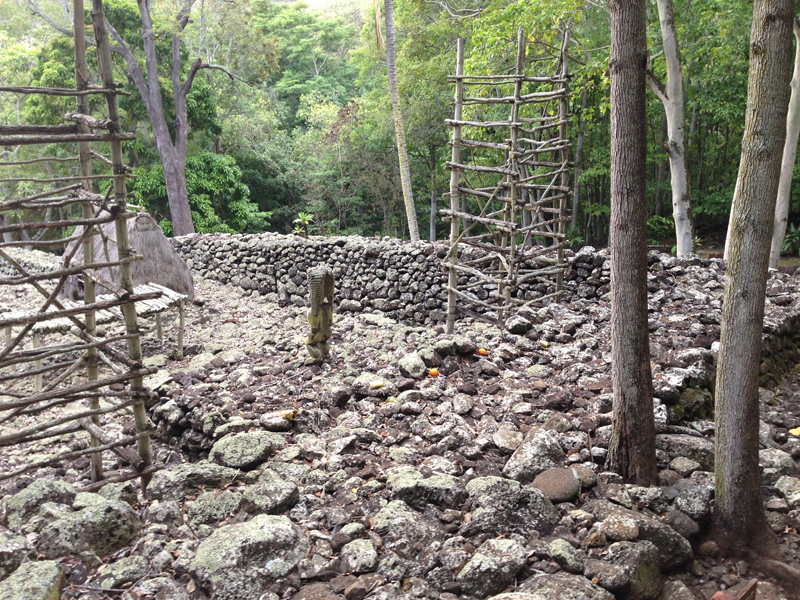 One Response to Kane’aki Heiau