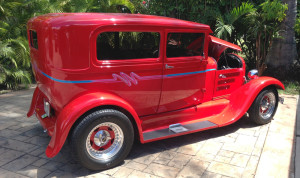 You never know how or when you’ll run into a hot rodder. Call it coincidence or synchronicity, but while having a totally unrelated conversation with Bob Frost, I happened to notice a brand new copy of “Hot Rod Magazine” sitting on his desk. We started talking about hot rods and of course I had to mention my collection of 1950’s hot rod mags and the Honolulu Hot Rods site. I

could tell Bob had a trick up his sleeve because as I was telling him how I find cars on the side of the road and photograph them, he had this mischievous gleam in his eye. When he said “Come here, I wanna show you something.”, I had to oblige. He brought me out to his garage and when he opened the door  my jaw dropped as I saw his “badass” 29 Ford, “Lil Red” sitting there in immaculate condition. Bob opened the garage door started her up. I jumped in and we took off to the gas station to top off the two custom gas tanks. Once we were fueled up, Bob

took me for a spin. “Lil Red” has all the comforts of a modern car, power windows, plush bucket seats and the biggest luxury, air conditioning. It has a fairly quiet ride considering that a 350 Chevy mill is crammed into the engine compartment. It sports a Edelbrock high rise manifold, a Holley 650 cfm carb, a Mallory distributor, custom valve covers and headers and plenty of chrome. Its teamed up to a turbo-hydromatic shifter and a Currie rear end 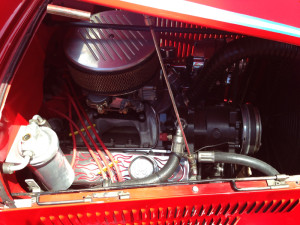 beefed up to handle 870hp. Bob punched it on a deserted straight away and “Lil Red” passed the century mark in a heartbeat. Smooth, quiet and rock steady, I could see why “Lil Red” is strong performer. Back at the pad, Bob told me that “Lil Red” has an all original body on a TCI custom frame, which is truly a thing of beauty. The new frame, made specifically for 29 Fords, gives it the strength, handling and stopping power of modern racing machine. Lil Red is  CA 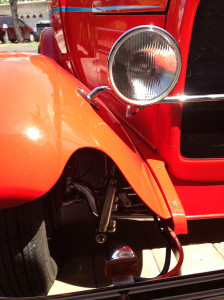 built and was sold to a guy in Pahoa who added some nice touches before Bob picked it up. There’s no detail left undone. “Lil Red” started as a 1929 Ford Tudor Sedan. This was the second year of the Model A body style which replaced the Model T. The Model A bodies were built by Detroit’s largest independent body producer, the Briggs Manufacturing Company. The original engine was an L-head 200.5-cubic-inch four-cylinder that produced 40 horsepower, with a top 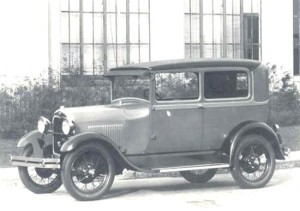 speed of 65 mph. All Model A’s were built on the same chassis size. Brand new, the 1929 Ford Tudor Model A cost $525.00 (see what it looks like fresh off the factory floor). The amazing thing about “Lil Red” is that the car handles and performers like a muscle car, has all the comforts of a new ride and retains the original body and trim right down to the hand operated front window that still opens up to let in the island breezes. We hope you enjoy the photos of “Lil Red” and a big Mahalo to Bob for hooking it up. 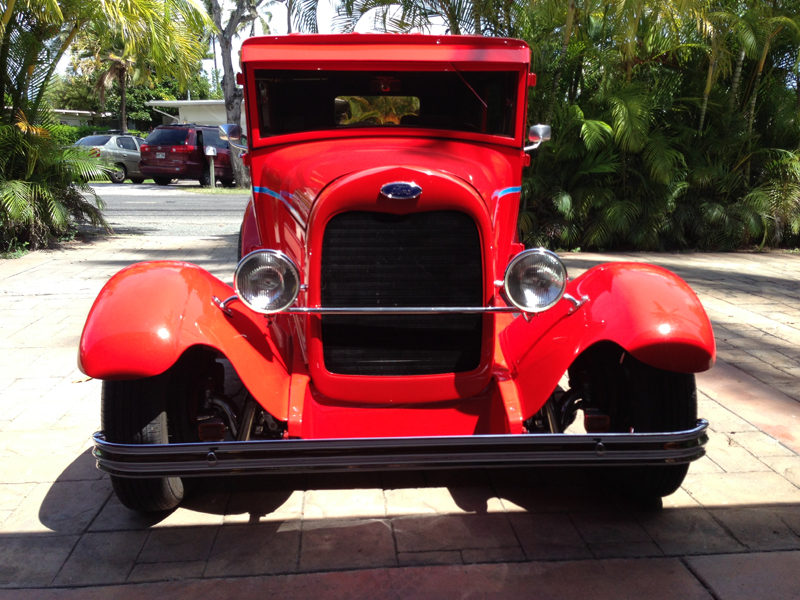 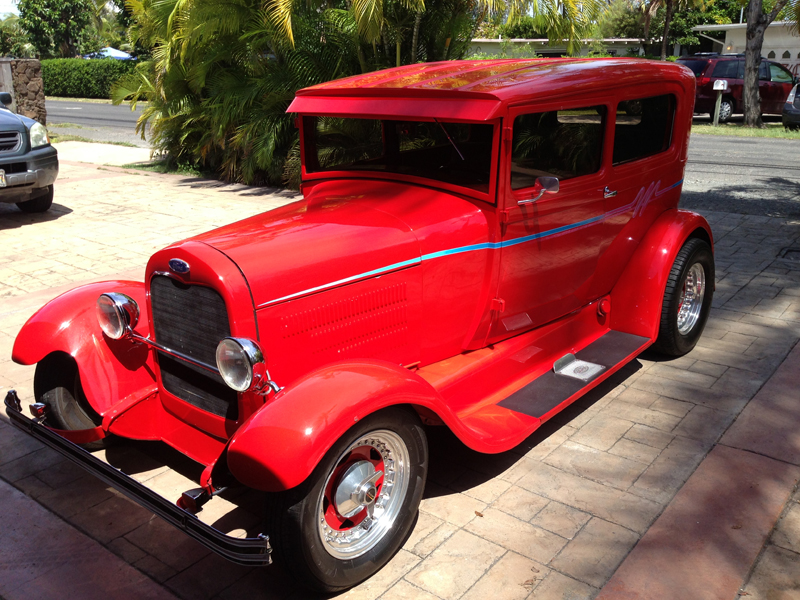 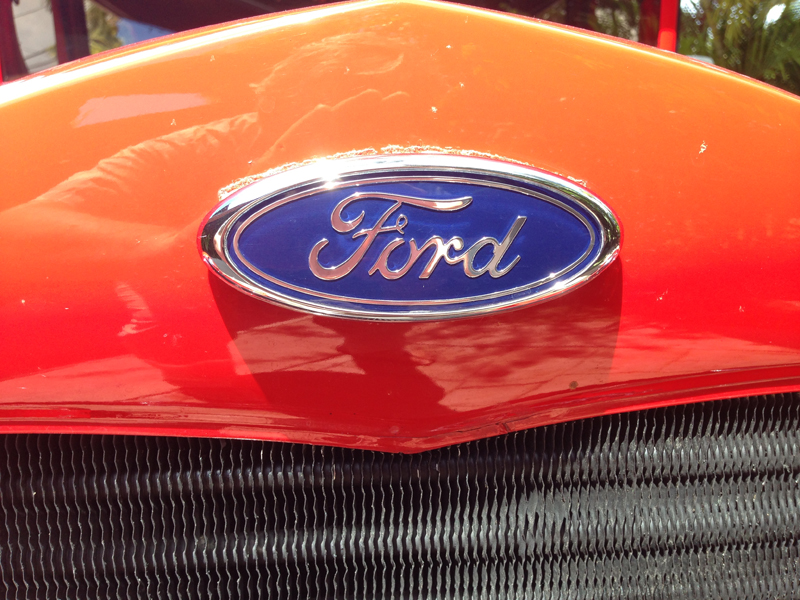 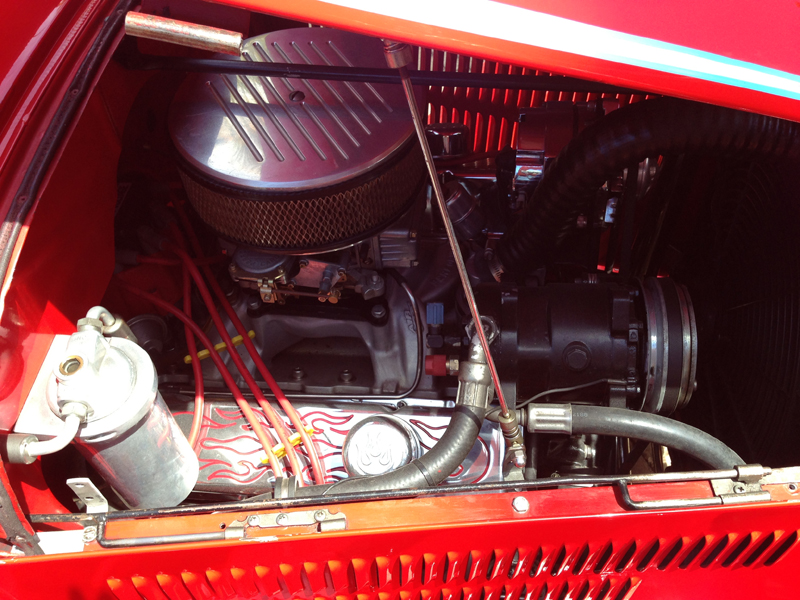 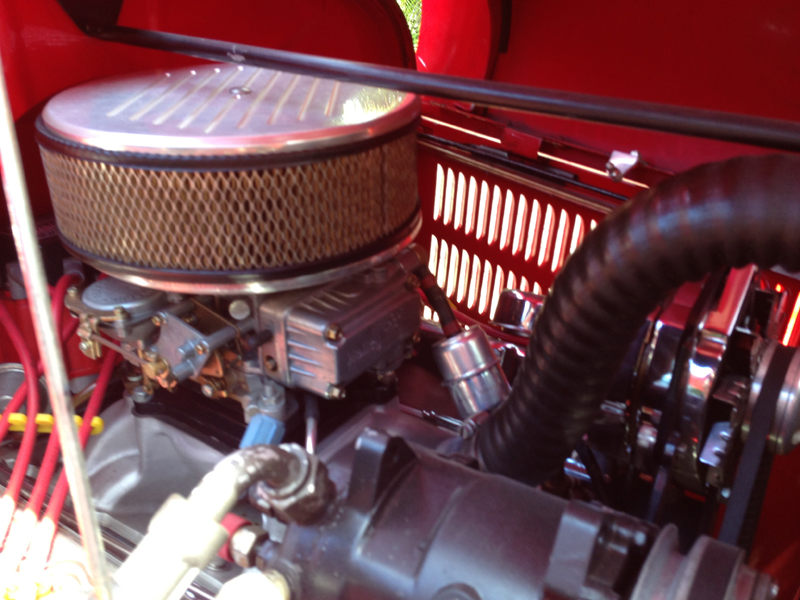 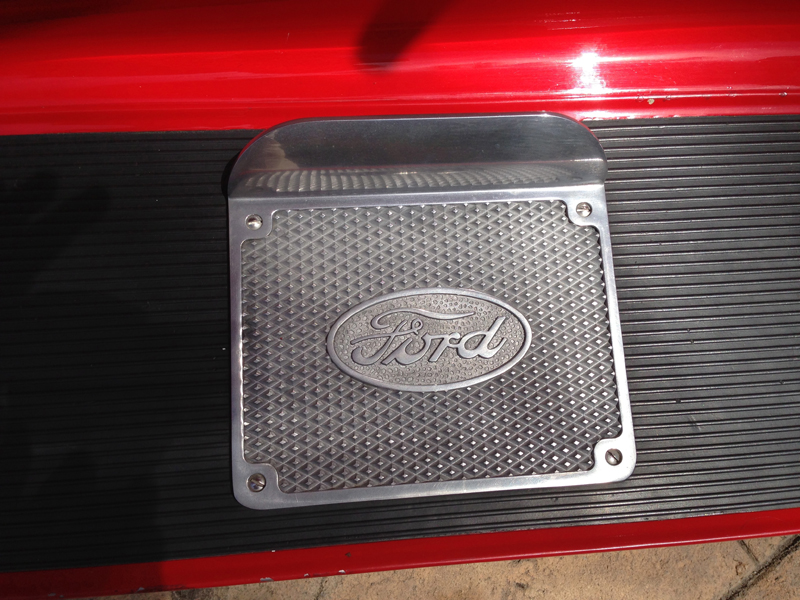 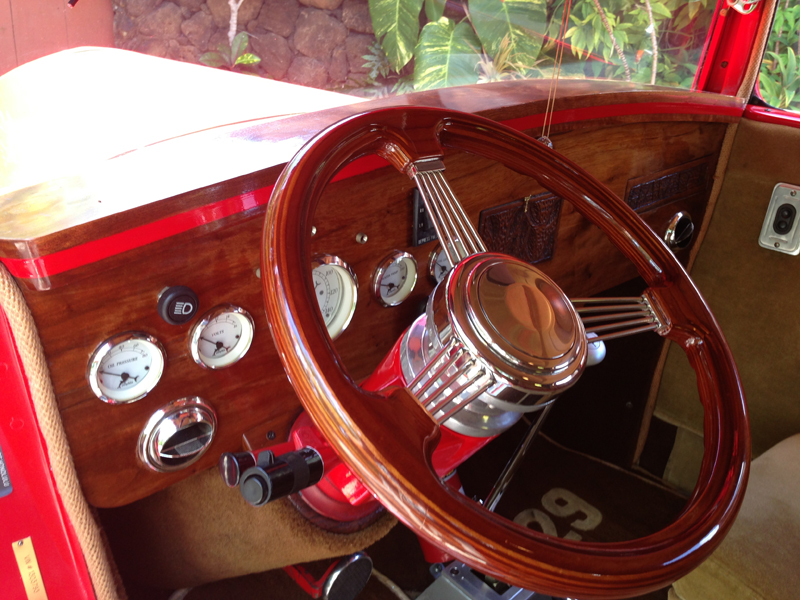 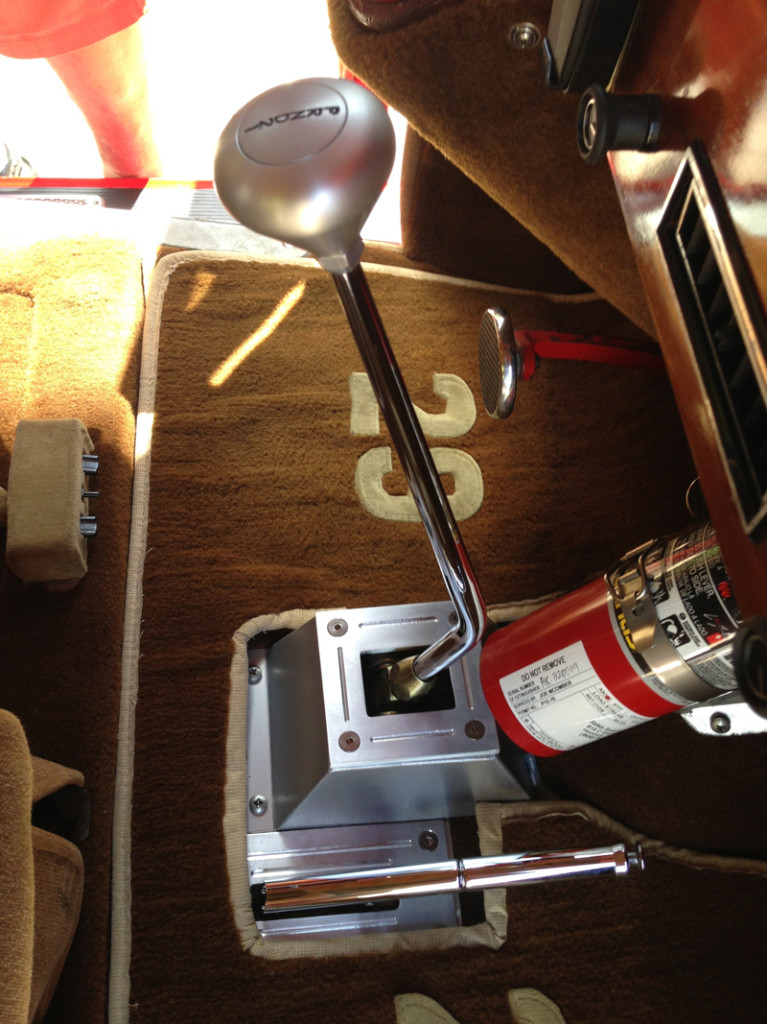 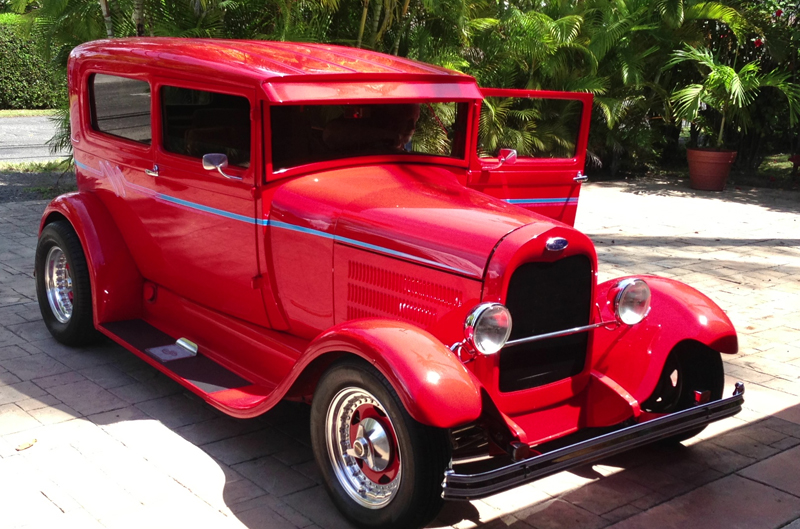 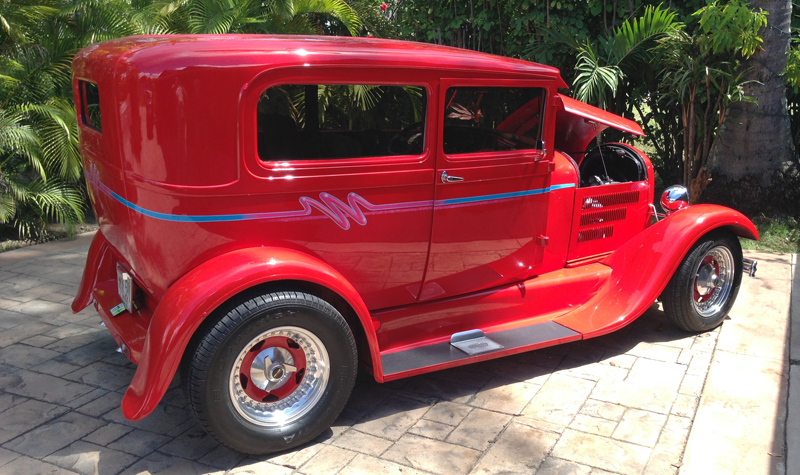 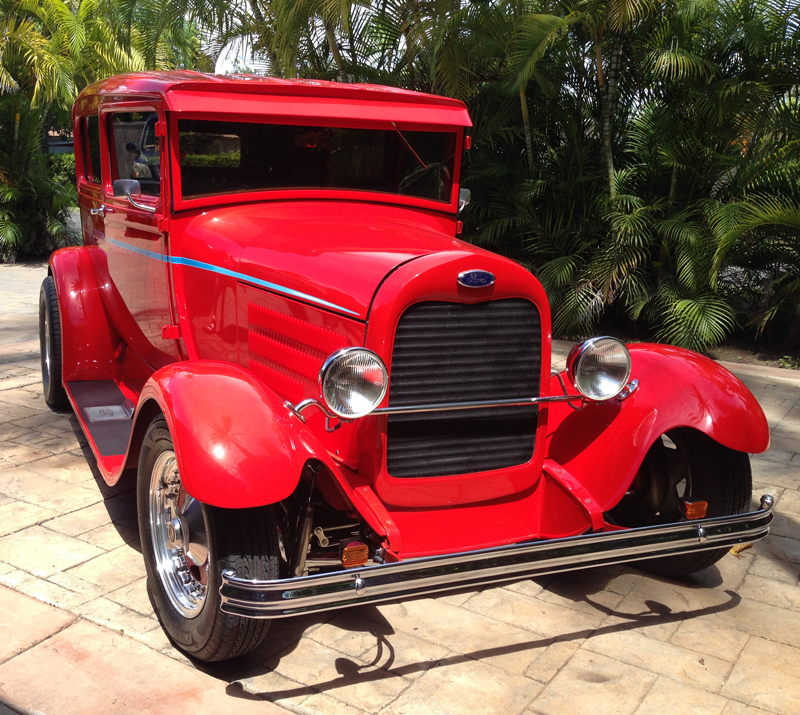